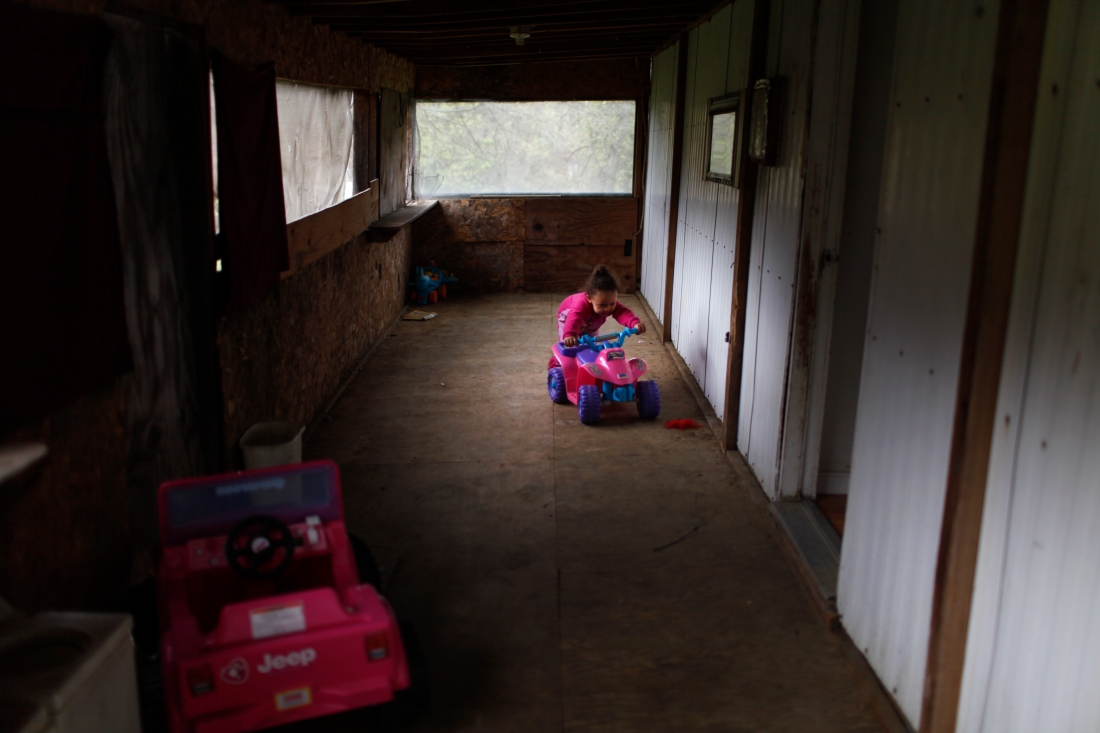 Whitney’s story is dear to my heart as a storyteller and a compassionate human being. Too often we are taught not to be compassionate towards our subjects whose stories we have been entrusted. There are of course journalistic ethical boundaries, which I hold to the upmost importance.

Every story I do changes me as a storyteller and a person. While I only spent a brief moment in time with Whitney, I learned so much from telling her story.  I got to witness how millions of Americans struggle from paycheck to paycheck. I got to witness a woman running from a physically abusive partner.

I was welcomed with open arms into Whitney’s life, given access I had never had before as a young storyteller, for about a week and a half. Then I never heard from her again. I knew her abusive ex-boyfriend was incarcerated and she was worried he was getting out soon. After she stopped answering my calls, I went to her workplace, Goodwill, to see if she was just blowing me off. Her coworkers didn’t know where she was either, although one alluded to the fact she was intentionally hiding. I believe her ex-boyfriend had been released from prison and she was hiding from him.

Even in the short period of time I had known Whitney, I knew her to be compassionate and giving and doing her best as a parent and very welcoming to me as a young photographer working on a class project. When she went missing, I was worried about her, but I wasn’t going to try to physically hunt her down. Under her circumstances, she certainly didn’t need any more attention attracted her way, especially a 20 year old photographer. This is also why I haven’t published these photos until now, when hopefully, she is in a safer situation.

So instead of focusing on her story, since I do not consider myself knowledgable enough to comment on any aspect of it, I will write about what each photograph taught me on my journey to become a non-fiction storyteller.

This is one of my favorite photographs I have ever taken. I love the natural vignette that occurred around this moment. I love that hot pink is really the only color seen. I love that you can tell it’s not a typical location for a child to be playing with such toys, at least children as we see in the media, but that she is still having a good time. I love how the soft light plays off the innocence of it all. This is your average exhausted mom with child photograph, but I love how it pairs with the next image in this story. 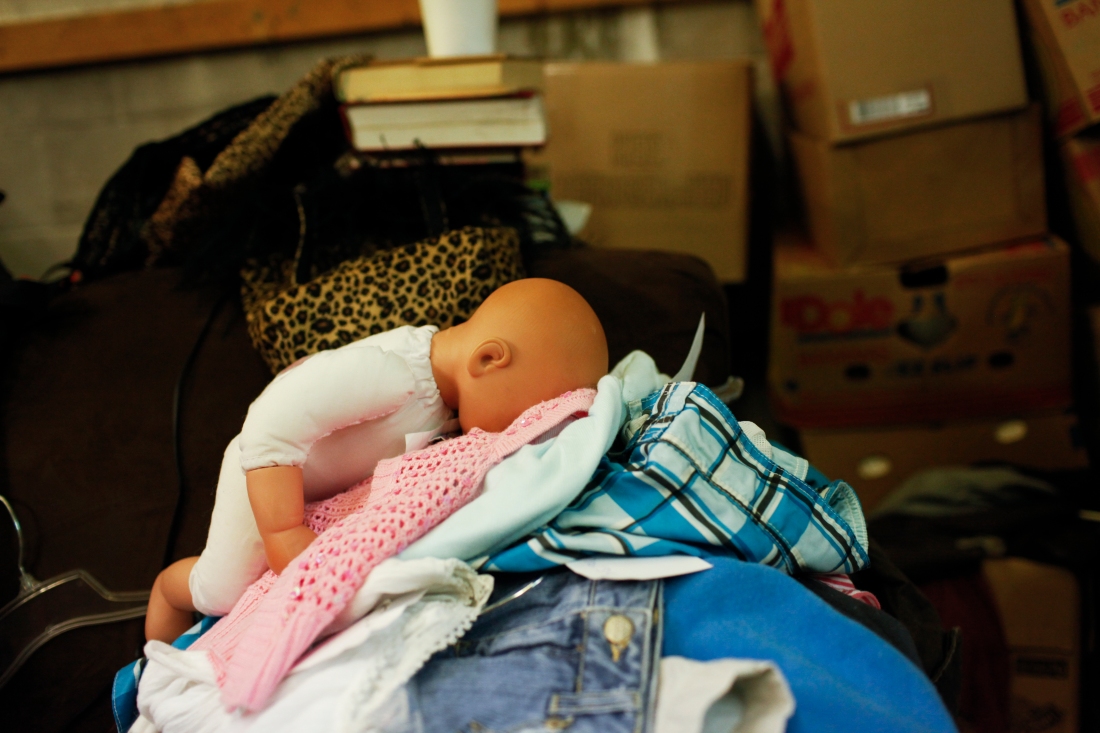 This is a quirky photo, which I have always been attracted to. I kept staring at this scene and I knew I had to take a photo I just didn’t know why. Perhaps it’s the metaphor of a chaotic scene combined with a child, although on top of the pile, being slightly neglected. 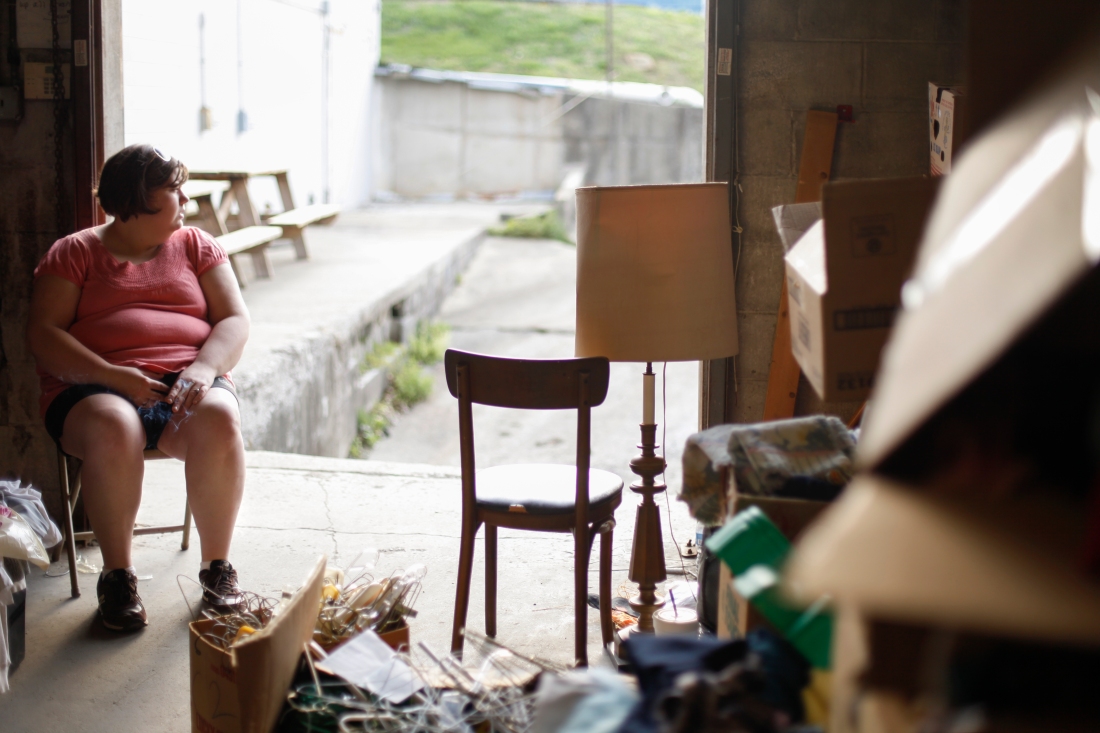 Here is Whitney at her job at Goodwill. I love that she’s separated from the chaos but she can’t seem to avoid it completely. 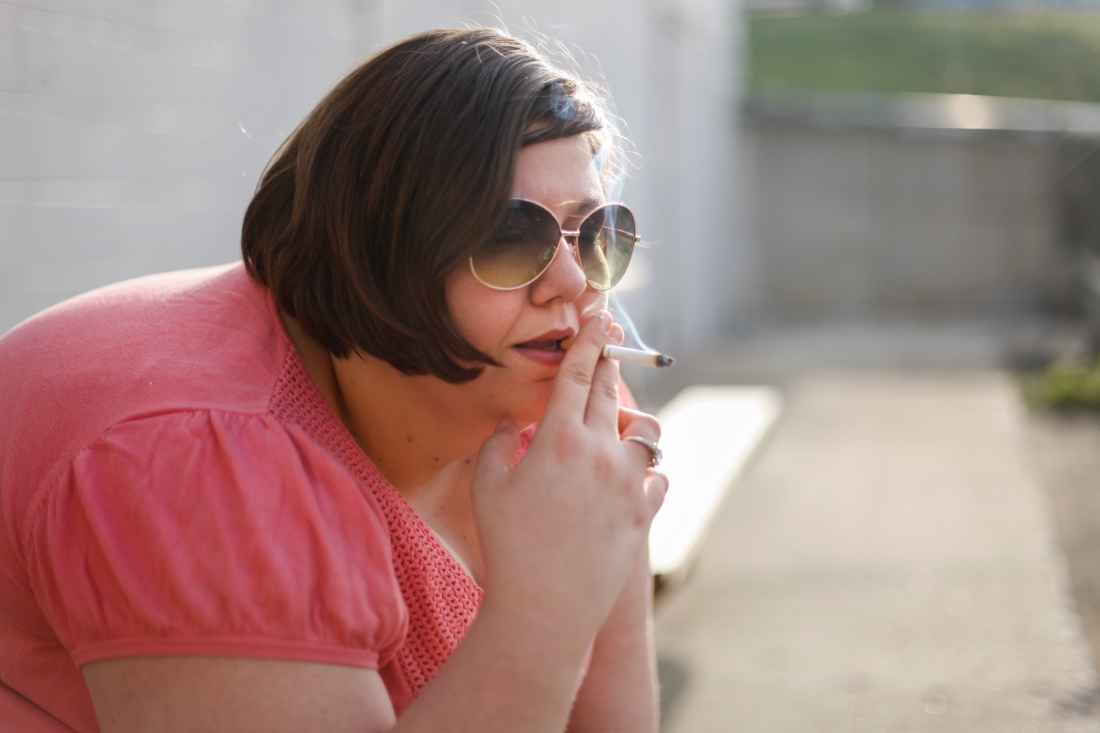 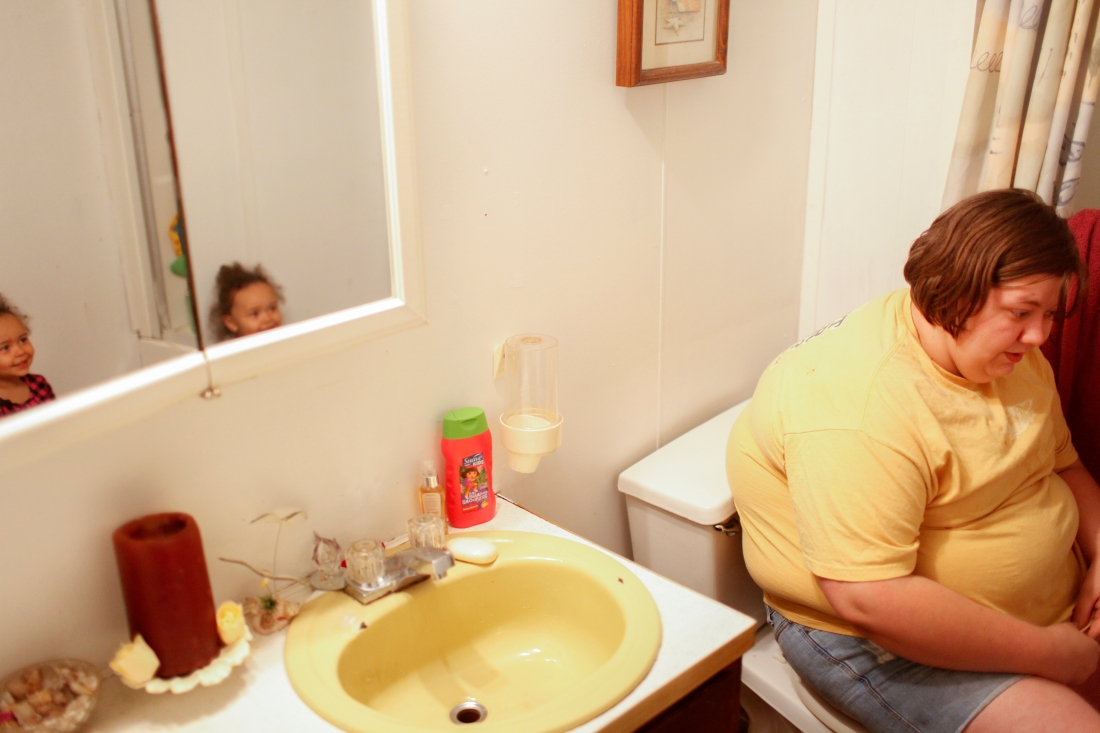 Here’s Whitney potty-training her daughter. I was so grateful to access to the this moment and I wanted to treat both of them with dignity in my images. I was still a very young photographer, so this isn’t an amazing photo, but there are some parts of it that I love. I love that there is a double reflection of the daughter, alluding that she might be a little bit of a handful. I love that you can tell Whitney is exhausted but patient. And of course, I love that I was allowed to witness and photograph this intimate moment. 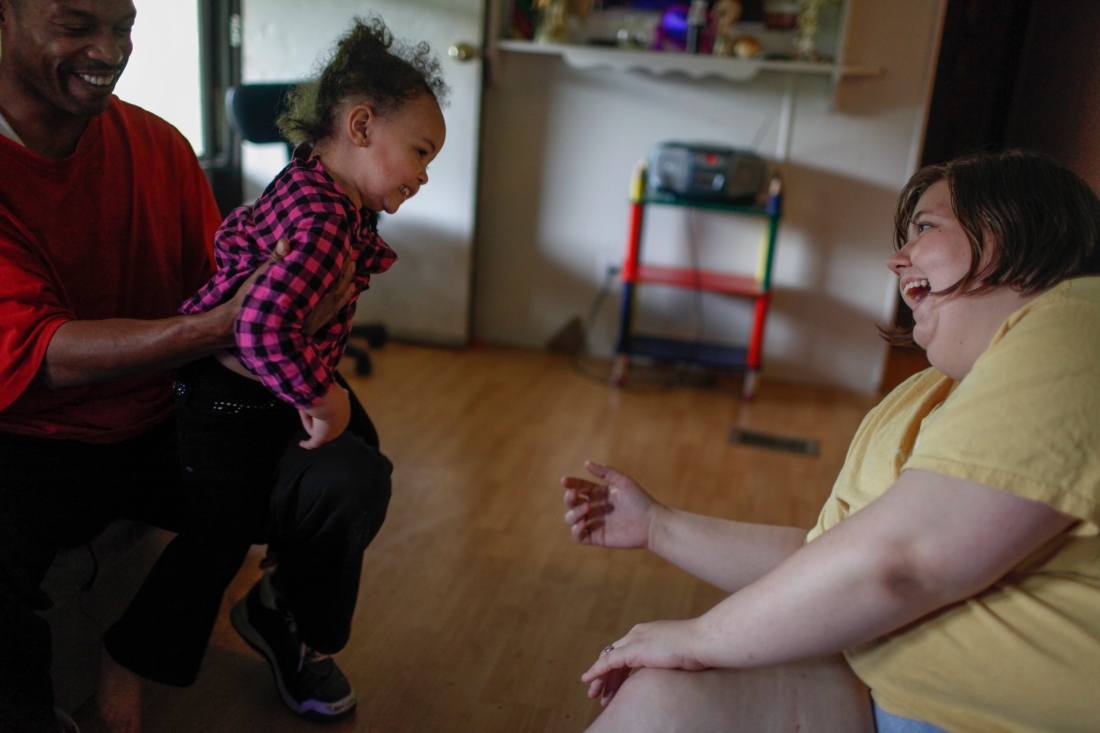 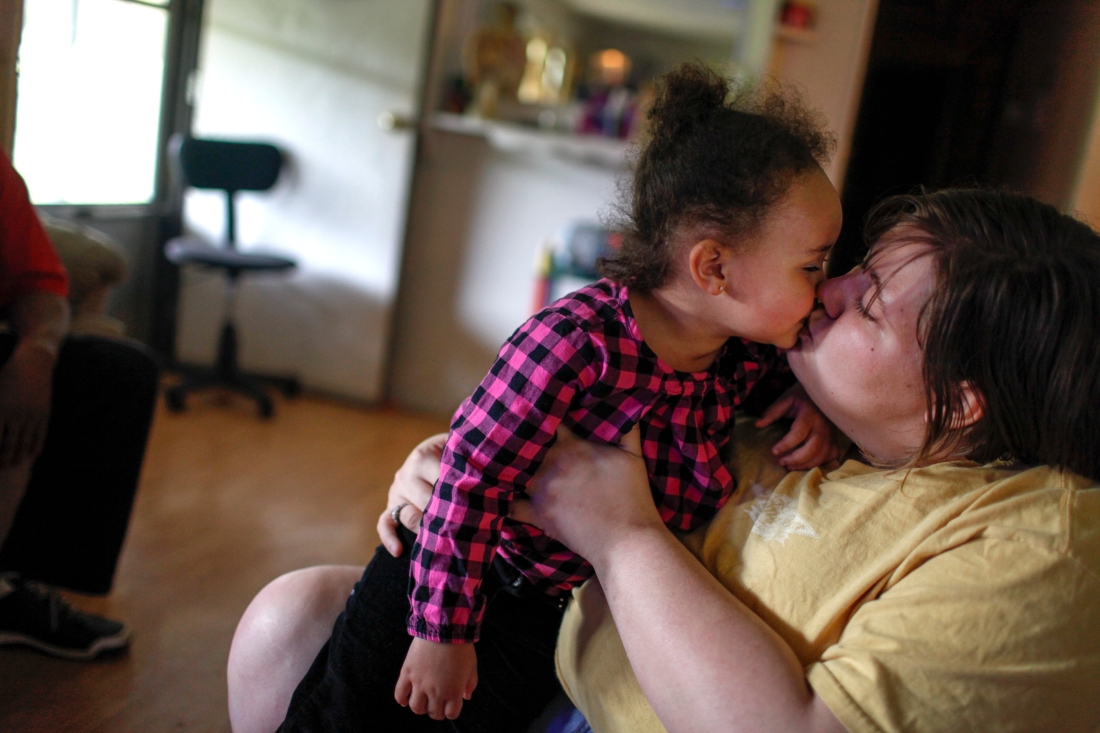 As a young photographer, I was elated to capture this intimate moment. There is no way of knowing if that would have happened if I hadn’t been there. I don’t think they were putting on a show for me, I think I have pretty good radar for that sort of thing. Maybe I’m just second guessing this moment because I was at a good angle. I never second guess perfect moments in crappy photos. 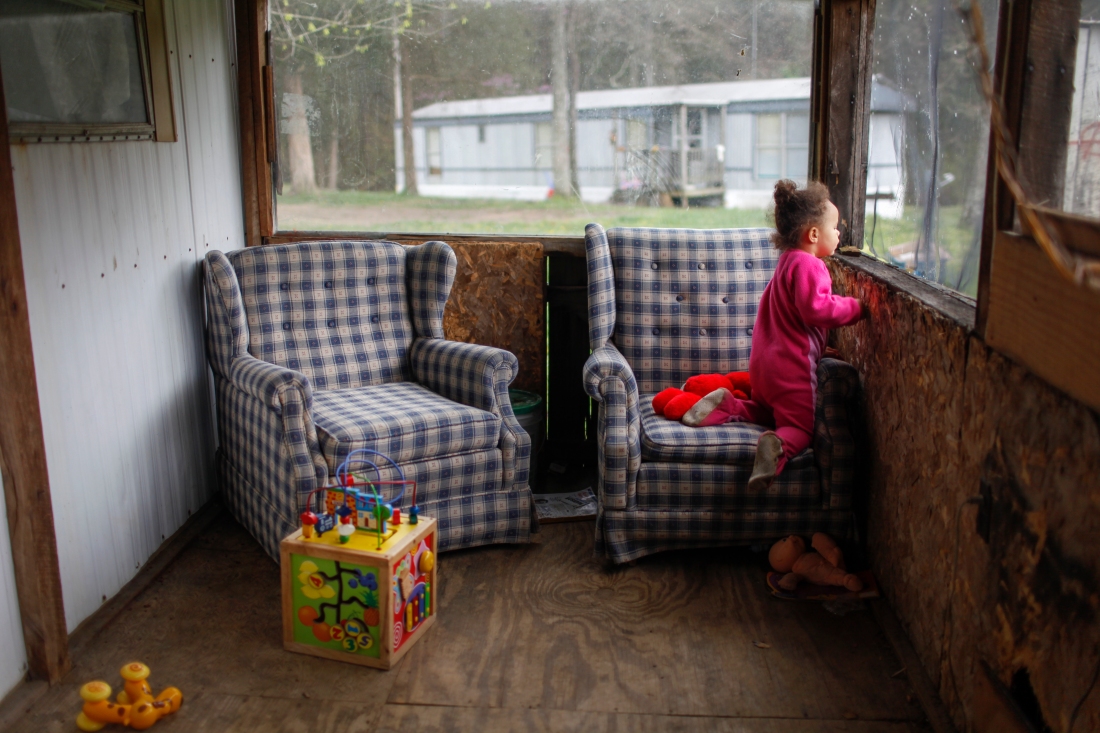 This is somewhat of a companion image to the first in the story, and it is also one of my all time favorites. Like the first image, I love the soft light, the natural vignette, and the hot pink. I also love that you can tell she’s in a trailer (because of the plywood and the trailer outside). I love that  she’s ignoring the toys and wondering if there’s something better outside. I can still smell the crisp, clean air coming in from the rain outside. I will always remember this moment, and that’s something I never want to lose as a storyteller.

I have been reflecting a lot on the ethics and my personal morals as a storyteller lately, and that’s what made me think about publishing this story.